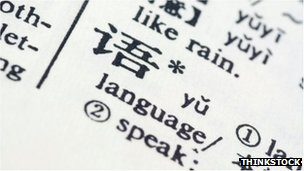 A newly published edition of one of China's most authoritative dictionaries has already been criticised by rights campaigners.

They complain that it has excluded a definition widely used by homosexuals in China for "gay".

The word is "tongzhi" (同志), whose primary meaning is "comrade", a form of address beloved of Communists for decades.

One of the compilers said they did not want to draw attention to its more colloquial meaning.

The newly revised sixth edition of the Contemporary Chinese Dictionary has 69,000 entries, 13,000 Chinese characters and more than 3,000 new phrases.

They include internet slang such as "geili" (給力) - meaning awesome - and such non-Chinese expressions as PM2.5, which refers to a pollution indicator for particulate matter.

But "tongzhi" (同志) - in colloquial Chinese the equivalent of "gay" as in "homosexual" - is not among them.

Linguist Jiang Lansheng, one of the compilers of the dictionary, said in a Chinese television interview: "We knew about the usage but we can't include it." 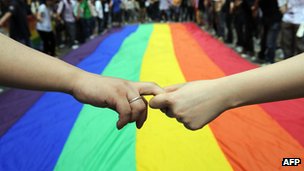 For Ding Xueliang, a social sciences professor from Hong Kong University of Science and Technology, this attitude is not surprising.

"The use of 'tongzhi' (同志) to describe homosexuality started in Hong Kong and Taiwan to make fun of the mainland's communist terminology because Chinese leaders address each other using 'tongzhi' meaning 'comrade' - for instance, 'Hu Jintao tongzhi' or 'Wen Jiabao tongzhi'," he told BBC Chinese.

"So it's quite normal that the Chinese government doesn't want to take this new meaning into the dictionary."

Some gay rights campaigners are up in arms.

One of them, whose name was given as "Nan Feng", told China's official news agency Xinhua it was unacceptable that the "gay" meaning of "tongzhi" was excluded from the dictionary just because of the compilers' own preferences and values.

"Tongzhi is the most commonly used, non-offensive term used by our circle to refer to homosexuals," Nan Feng was quoted as saying.

"We hope the compilers can view the word from an impartial standpoint."

The standard word for "homosexual" in Chinese is "tongxinglian" (同性戀), which translates literally as "same-sex love". But many gay Chinese are said to view it as too clinical.

But the Contemporary Chinese Dictionary's omission was not the first by a 21st Century lexicon.

The 11th edition of the leading dictionary, Xinhua Zidian, published in 2010, also excluded the meaning.

Homosexuality was illegal in China until 1997, and for several more years it was defined as a mental disorder.

Analysts say some people see the omission of "tongzhi" (同志) as proof that Chinese morality is not moving with the times.

But social sciences professor Ding Xueliang thinks the furore over the definition is also hiding a growing tolerance of gay rights, and a new assertiveness among Chinese people.

"There is growing sympathy towards and even support for gay people", he says. "Otherwise, there would not be so many people out there to protest against this new edition.

"But China still has a long way to go in protecting the rights of gay people in employment and promotion, and many other aspects of society."